Plans for a citizens-led convention on the constitution have taken a major step forward as a result of the successful Assembly for Democracy held in London on November 14 jointly called with Occupy Democracy.

A planning group will meet on December 5 to start the preparations for a convention, with suggestions that it could take place as early as May next year. Everyone present at the “Re-Imagine” Assembly was invited to be part of this process. END_OF_DOCUMENT_TOKEN_TO_BE_REPLACED

Changing a constitution often involves unconstitutional actions. Just ask the ruling class. Down the centuries, they’ve used the most unorthodox of means, even what might be considered unlawful methods, to make fundamental changes to the state.

A couple of episodes from the 17th century, when the substance of the present constitution was settled, show how history moves in an unconventional, even revolutionary way, when it comes to shifting state power from one class to another.

The Century of Revolution is what historian Christopher Hill named his ground-breaking book first published in 1961. His sweeping account of a century that saw England transformed from a minor power to a dominant state is about social and political revolutions.

In 1649, after years of civil war, the Parliamentary forces under Oliver Cromwell executed Charles I, despite his claim to rule by divine right granted by God himself. England became a republic and a Commonwealth. The House of Lords was abolished, as was monarchy. Hill called it a great, yet incomplete revolution. END_OF_DOCUMENT_TOKEN_TO_BE_REPLACED 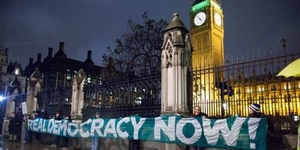 Re-Imagine Democracy – towards a Citizens Convention on the Constitution

A hunger for democratic change is sweeping the UK, expressed in last year’s independence referendum in Scotland and in the wave of enthusiasm for renewal generated by Jeremy Corbyn’s stunning campaign. END_OF_DOCUMENT_TOKEN_TO_BE_REPLACED

Penny Cole –  Assemblies for Democracy – the story so far END_OF_DOCUMENT_TOKEN_TO_BE_REPLACED

In this blog first published on the website of the Scottish Left Project, GRAEME ARNOTT points out the human rights implications of increased surveillance in Scotland, much of it using technology first developed by the Israeli military and tested on Palestinians.

“The [Investigatory Powers Bill provides us with] powers that I believe we need, whether on communications data, or on the content of communications, I feel very comfortable these are absolutely right for a modern, liberal democracy.” – David Cameron

In contrast to those who would prefer a revolution without a revolution, radicals are possessed by what Alain Badiou calls the ‘passion of the Real: if you say A – equality, human rights, freedoms – you should have to say B – the terror needed to really defend and assert the A’. But what, if, rather than applying Badiou’s formula to the radical left, we apply it to Cameron’s unrestrained Conservative majority government? If you say A – inequality, loss of human rights, freedom of capital, freedom to privatize, deregulate, and exploit the planet – then you should have to say B – the terror needed to defend and assert the A.’ Then we see that when Jen Stout wrote in an earlier Left Project article that austerity and surveillance are the primary features of unrestrained Tory rule, she wasn’t simply stating an empirical fact about the government’s future policy plans but rightly setting out that both need to be regarded in their proper historical context. Whereas austerity is the unrestrained class war of A, the paranoid surveillance spy-state is the Tory terror that will be used to ensure its success. END_OF_DOCUMENT_TOKEN_TO_BE_REPLACED

Note: the following article is based on ongoing research activity at Heathwood Press. For more information and to view Heathwood’s series on democracy, emancipatory politics and societal transformation, see here.

General elections are top-down events: attention focuses on political parties and their leaders. Personalities and success or failure move centre-stage. Policies get a mention, but are assessed like moves in a game of chess. Can this top-down perspective be reversed? Can a form of politics be found which retains a grassroots or ‘bottom-up’ emphasis?

In these notes, we attempt to do two things. We explain why, in our view, this question is important. And we explore challenges that a grassroots politics must face. END_OF_DOCUMENT_TOKEN_TO_BE_REPLACED

In this series of four blogs I’d like to think about active citizenship and democracy. In this regard, I will not be writing about:

1. How we can use civic muscle and our precious collective efforts to change a disinterested technocratic elite, fired by the moral mission of “society’s best and brightest in service to its most needy”.
2. Reforming systems, or how we can get our leaders to be better leaders, or even how we can lobby for better policies or legislative frameworks.
3. Getting more people to vote.
Nor will I be… END_OF_DOCUMENT_TOKEN_TO_BE_REPLACED

There have been two counts of victory in the courts this week. The latest took place yesterday. It concerns Lord Janner, accused of historical child abuse, and the DPP, which refused to prosecute him. Even today’s Daily Mail is impressed. It reports:

“Director of Public Prosecutions Alison Saunders provoked fury among police chiefs when she ruled in April that Lord Janner could not be prosecuted because of his dementia, despite detectives collecting enough evidence to charge him with 22 offences against nine victims in the 1960s, 1970s and 1980s. END_OF_DOCUMENT_TOKEN_TO_BE_REPLACED

What a week, we’ve just finished the ABCD Festival where we celebrated with people from 17 countries. We revelled in the greatness of small, local, and organic things. And we weren’t alone, yesterday we trended at number 6 in the UK on Twitter for over two hours, then drop to number ten for a further hour; and we also trended at number 9 in Canada.

Next week we’ll write more about the festival once all the graphic art and presentations come through. Another big dimension of the week was the launch of my book: Asset-Based Community Development-Looking Back to Look Forward.

What hope is there for a re-invigorated democracy in an age of press misinformation and data deluge?   The battle for democratic renewal is also a battle about the control of information: who owns it and what they do with it. We urgently need a ‘new commons of information’ lead by Assemblies for Democracy (two examples given)

“A free press is essential to a healthy democracy. There is a purpose to journalism, and it is not just to entertain. It is not to pander to political power, big corporations and rich men. Newspapers have what amounts in the end to a constitutional duty to tell their readers the truth”. END_OF_DOCUMENT_TOKEN_TO_BE_REPLACED